Eyes of the tiger 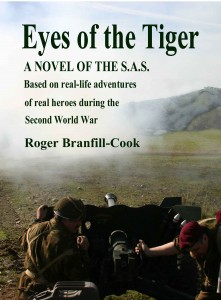 Every tiger has a white spot on the back of each ear.  This helps the young tiger cub ward off predators approaching from behind, because the spots resemble eyes. The adult tiger preparing to attack will twist its ears so the two extra “eyes” face forwards.

This story is dedicated to the real-life heroes of the Special Air Service during the Second World War. A member of my family never talked about the War.  My Mother told me it was because of the terrible things he had seen, especially at Monte Cassino.  Many years later, in his eighties, he broke his silence, and the Official Secrets Act, and related to me many tales of the S.A.S., including actions in which he had been involved. And yes, he did destroy a Tiger Tank…

Therein lies the inspiration for this book.

Apart from several historical personalities mentioned in the text, any similarity to persons living or dead is purely coincidental. In the best traditions of the S.A.S. my sources shall remain anonymous.

Eyes of the Tiger contains no stirring stories of bearded men in turbans, charging in their jeeps to shoot up rows of Axis bombers. Nor the crazy combats in the forests of central France with Jedburgh Teams betrayed to the Nazis and overrun at night by masses of SS fanatics. There are no dramatic rope escalades to liberate a London embassy or assaults on hijacked airliners. No wandering about in the deserts of Iraq with radios that refuse to call for help which never arrives….

Eyes of the Tiger is inspired by true life actions of real heroes, who never hesitated to jump out of a perfectly good aircraft, at night, in the winter, over the mountains of Yugoslavia, or crash land their overloaded gliders to support airborne assaults, or merge into the countryside to carry out surveillance missions and covert operations.

This is the other story of the S.A.S., of a small dedicated group of specialists trained to act as the pathfinders for the Airborne.

A historical novel but based on real life actions, many never before described, of silent professionals, trained to kill but retaining the human touch….

The anonymous S.A.S. Officer whose actions form the basis for this novel was created a Chevalier de la Légion d’Honneur by French President Chirac, for his part in the liberation of the South of France in 1944. 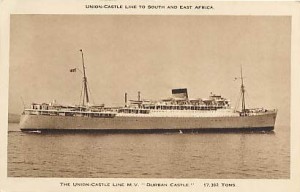 A post-war view of the ‘Union Castle’ back in civilian livery after her wartime use as a troopship. 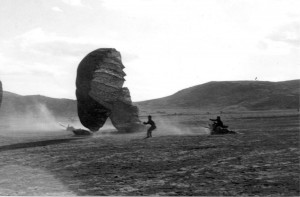 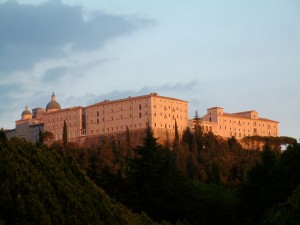 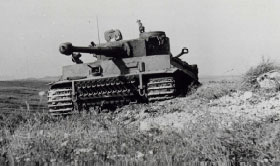 An early Tiger Tank, showing its formidable frontal appearance and the enormous 88mm main gun. This example was knocked out in North Africa, but it is similar to the Tiger destroyed by the hero of my book, in Italy. 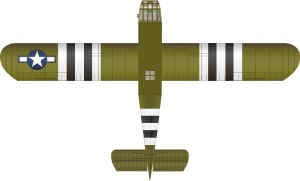 The Waco CG-4A Glider was the principal transport glider of the US Army, and was also used by British Forces, who received 1,059 Wacos under the designation ‘Hadrian’.

Payload: 4,060 pounds, being more than the glider’s own empty weight, comprising

With a production run of 13,909, more Waco CG-4A gliders were built than any other glider type in history. For comparison, the UK built just under 6,000 gliders, including the Horsa and Hamilcar, and Germany just under 4,000 of all types, including the DFS 230 and the Gotha 242. The total Waco construction far outstripped some types of powered aircraft. More CG-4A’s were built than, for example, B-17 Flying Fortresses or P-38 lightnings.

Of the sixteen plants producing the Waco, the most efficient was the Ford Motor Company, at Kingsford, Michigan, which built 4,190 gliders at an average cost of $15,400 apiece (compared with a maximum price elsewhere of $52,000 and an average price of $25,000). At Kingsford, 4,500 men and women worked around the clock in 8-hour shifts, turning out a peak production of 8 gliders a day.

It was capable of carrying a jeep or an antitank gun or a Pack Howitzer, and to prevent the aircrew in the nose from being crushed by the cargo in the event of their glider colliding with an obstacle on landing, an ingenious system of cables was attached to the front of the load in such a way that, if it broke free on landing, the complete nose section containing the pilot and co-pilot would hinge upwards out of the way, at least in theory. (Of course, if they had run nose-first into an obstacle, this reassurance would be of little practical use). 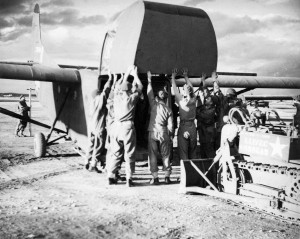 Loading a Waco, this time with a bulldozer, showing the hinged nose section.

The smaller size of the Waco compared with the British gliders meant that it could be retrieved from small landing fields by a daring aerial manoeuvre called the ‘snatch’. A C-47 would fly low and slow over the field, trailing a hook to pick up the tow wire of the Waco suspended between two poles. The tow plane pilot would open up his throttles, the hook would take up the slack, and the Waco would be pulled forward and up into the air. 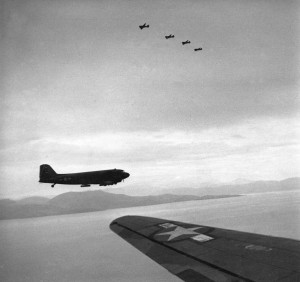 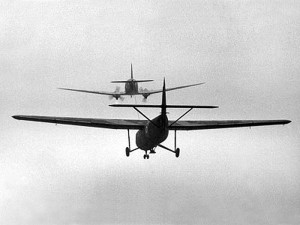 A British Horsa glider towed by a C-47.

The much larger Horsa glider could carry a jeep plus a 6-pounder antitank gun, its crew and ammunition. 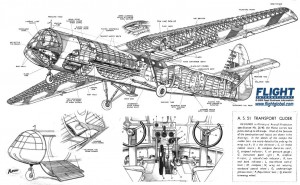 A cutaway drawing of the Horsa, first published in Flight Magazine, showing the all-plywood construction, which allowed Horsa construction to be sub-contracted to furniture manufacturers.

Capacity: Up to 25 fully-equipped troops. 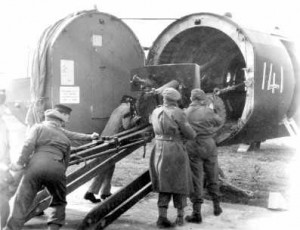 Loading the special Airborne version of the 6-Pounder, which had folding trails. 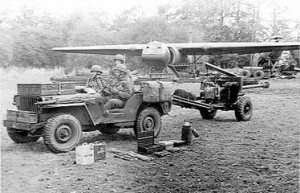 The gun team driving into action. 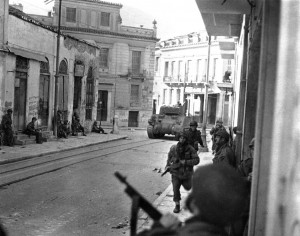 Paratroops supported by a Sherman tank engaged in street fighting in Athens.